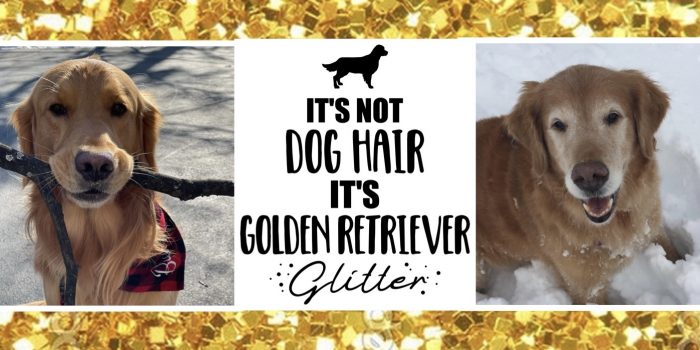 In honor of National Golden Retriever Day, I wanted to share some stories of my favorite goldens I have had the pleasure of raising.

Our first golden was named Alex (think of Alex P. Keaton from Family Ties). He joined our family in 1998.  He was the typical fluff ball with such a friendly personality!

He loved to swim with his best friend who lived next door, Briggs.  Alex was a gentle soul and would always let Briggs get the ball.

He was so good natured that if other little dogs would run up and try to jump on him, I’d have to fend them off for him!  He was such a quiet boy.  I can count on one hand how many times he barked in his life!  When he would bark, it was one single, “WOOF”.

Alex had a stuffed animal dog which he would take everywhere with him.  It was the best purchase I ever made at a CVS on a whim!  His name was Baby.

Alex would shake him and carry Baby to the car when it was time to go “bye bye”.  One time we had a house full of friends and Alex came into the middle of the group in the living room and proceeded to hump Baby.  The whole room was rolling with laughter!

Alex was the reason I wanted to start a pet sitting business!  His likeness is used in our logo.

In 2007, we adopted Cooper from Joyful Rescues in New York.  I had seen him on PetFinder.com and I thought he’d be perfect for our family.  They had a lake there and he was enjoying his time dock diving!  I am so glad they chose my application as his new Mommy!  Cooper was my buddy, my shadow, my co-pilot.  He would watch me get ready in the bathroom and he knew the exact moment I’d be finishing up.

He’d make sure he was not going to be left behind!  He wanted to go anywhere I was going!  He didn’t care where.

Sometimes we’d arrive at our destination, and he wouldn’t want to get out of the car!  He loved to go on walks in the neighborhood or at parks.

He was a strong swimmer.  In his younger days, he didn’t mind being tossed around in the ocean waves

at Cape Henlopen!  We went to the Golden Jubilee at Dewey Beach with him 2x.  He also loved to swim in our cousin’s pool.  He would never jump in, just walk in on the steps.  He’d swim around, then want to perch on your legs while you held him up in the water.

Cooper loved to rip open gift bags!  He’d dive his nose right in the gift bag and search for treats and toys.  He’d pull out each individual piece of tissue paper, then proceed to shred the bag.  It was so funny to watch!

When Cooper was a young pup he learned a trick. I would tell him to sit, then down, then roll, and “put your paws up really high”.

He actually won 2nd place in a talent contest at a Bark for Life event in New Tripoli.  He remembered that trick his entire life and would do it when asked if he had an audience.

I miss my co-pilot Coop.

We brought Buddy home on March 1, 2020 right before the pandemic.  He’s my little skinny goof ball.  He likes to walk, but only if I am the one who walks him. He tries to avoid going into the car. He does get a little car sick. 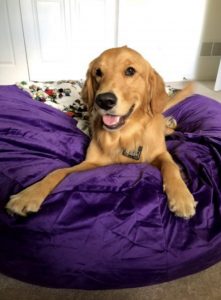 He’s the first dog I’ve had that insists on licking everyone!  We get a thorough bath when we wake up.  He also likes to try to lick the soap as you are taking a shower.  He won’t try to lick the shampoo, only the soap!

Buddy is a friendly guy and when you arrive, he gives a big toothy smile.  It looks a little like he’s baring his teeth at you, but he’s actually super excited you are there!

Buddy has certain dog friends in our neighborhood.  Each time we walk past their houses, Bud stops and stands perfectly still.  He listens to hear any barking and he watches for any movement.  If he could, he’d go up to the front door and ask if his friends could come out to play!  He is like a puppy stalker!  Sometimes it really makes our walk last extra long from all the stalking.

Buddy was reluctant to swim the first summer we had him.  He didn’t seem to realize he had to move his front legs AND his back legs!  He would start to sink and I’d have to grab him and hold him up in the water. 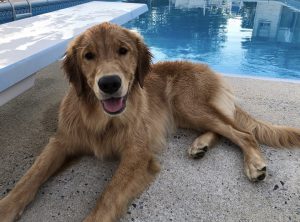 We tried Cooper’s lifejacket on him and then he started to get the hang of it!  He was really feeling confident!  Now you can’t keep him out of the pool.  If he sees the kids splashing or playing, he jumps right off the side of the pool and LANDS directly on top of the kids! Just make sure he doesn’t jump on you in the deep end….that’s where he jumped on me once!  My hat and glasses flew off and I fell off my raft.

In May of 2021, Buddy became the proud Daddy of a litter of puppies with Summer, at his breeder.  We were all waiting in anticipation for the big event!  Summer had 3 boys and 3 girls.  The puppies were healthy little chunkers.

It was so heartwarming to be able to watch them during the first few weeks of their lives!  We were able to tune in via video cam and watch them at any time of day.  Three of the six puppies went to families that I keep in touch with.  It’s so nice to see how they are growing and their families are so happy.  I am so thrilled I could be a part of this experience, bringing these lovely sweethearts to their families.

The goldens in my life have surely given me such joy!  I will never forget the happiness we’ve shared.